This is One Overlooked Root Cause of Anxiety 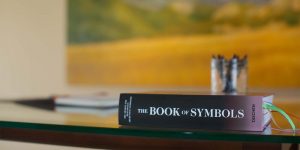 There is a saying that goes, “An idle mind is the devil’s playground.” If we understand the “devil” as the aspect of our minds that is rooted in fear and prone to anxiety, this saying makes sense, especially for highly sensitive people who are also deeply thinking and need their minds to be engaged as much as the heart needs to be nurtured. When the mind is too idle, empty or bored, anxiety is more likely to take root. Let’s flesh this out.

As highly sensitive people, we are not only deeply feeling but we are also highly analytical. Those on the sensitive-anxious-creative spectrum almost always describe themselves as “over-thinkers.”

The tendency to “over-think” often arises both as a defense against big and deep feelings – it’s safer to travel into the realm of thoughts and “lean to the left”, as Daniel Siegel teaches – than it is to feel the enormity and messiness of emotions, especially if, as a child, you didn’t have anyone to hold and guide you through the terrain of emotions (most kids didn’t).

You’ve also likely been told that “you think too much” by well-meaning parents, teachers, partners, and friends who didn’t (and still don’t) know what to do with the places where your mind wandered. The thoughts of a highly sensitive child-then adult are often far-reaching and brilliant: kids as young as five pondering death; slightly older kids wondering about the meaning of life and the size of the universe (does it ever end?); teens reading about the afterlife and why we’re all here. Telling a sensitive person “you think too much” isn’t helpful as it denies the scope of the deeply-thinking person’s mind.

For thinking isn’t only a defense; it’s also a basic human need. Our minds need to be engaged and stimulated. They need to sink into ideas that light them up and encourage them to wander into interesting territory. We talk a lot about “quieting the mind” in spiritual circles – which is an important skill to learn – but our minds are extraordinary tools for creativity, learning, and innovation when they’re given the right attention.

When a child’s voracious need to understand the world and the universe is supported, the far-reaching questions that arise both from the anxious mind and the creative mind can be satisfied. When one of my sons (both of whom are highly sensitive) was younger he was terrified by the thought that when we die we disappear into nothingness. As many of my clients have shared similar thoughts with me, I know that this is a common question for the highly sensitive child.

We spent many months talking about what happens when you die. I shared my beliefs, but “belief” wasn’t enough for him; he wanted evidence. Every night at bedtime (nighttime is when the fears are unleashed), his sensitive-anxious-creative mind wandered into this territory, wondering and worrying himself into an anxious tizzy. I held him. We talked. We wondered together. We discussed the topic as as family. But still his scientific brain demanded evidence.

I wasn’t quite sure how to provide him with evidence until I remembered a book I had read years earlier called “Dying to be Me” by Anita Moorjani where she shares the compelling story of her journey through cancer and into the afterlife. As her nearly instantaneous healing was documented by doctors, this sufficed my son’s need for evidence, and from the moment he read the book his questions were answered and he was able to move on. He was about eight years old at the time.

All of this to say, we talk a lot about the emotional sensitivity of the highly sensitive person, but there is much less discussion about the high need for mental stimulation. Many highly sensitive people are also highly gifted people, meaning that their need to be challenged intellectually is as important to their overall well-being as learning how to take care of their sensitized physical bodies and attend to their sensitive hearts. Left to wander around in an under-stimulated mind, as often happens in most learning environments, anxiety can easily take hold.

What does all of this mean in simple language? It means that boredom is one root cause of anxiety.

I’ve seen an upsurge in anxiety during this time of quarantine for a myriad of reasons, and one of these is due to the fact that many of our typical ways of engagement have been taken away. Left alone in our homes without access to some aspects of stimulation, the active mind that needs healthy stimulation the way our bodies need healthy food is more prone to slip into anxious territory. In the absence of healthy stimulation, it seeks out unhealthy stimulation.

I remember one time my son said to me, “One of the reasons I can’t fall asleep at night is because my brain is bored. When my brain is busy all day long – like when we travel – I fall asleep quickly.” When he’s bored, he can’t sleep, and that’s also often when his mind travels into unhelpful territory as he tries to answer unanswerable questions in the dark of night. It’s like people who have restless legs because they haven’t exercised enough. When we don’t exercise the brain, it’s not happy. But when his brain is engaged, challenged, and stimulated, thus receiving the nutrients it needs for well-being, he falls asleep just fine.

Now we have to be careful here that we don’t stay busy and fill our brains as a way to avoid the emotional realm. We all need downtime where we can slow down into the realm of the heart and body, and it’s easy in our culture to move quickly as a way to distract from the messiness and vulnerability of emotions. Intellectually gifted people may be more prone to relying on their mental capacities as a way to avoid the heart than someone with more kinesthetic or musical gifts, for example, as the intellectually gifted are not immediately invited into the realm of body and heart through their pursuits, passions and professions. This awareness can help them notice when they’re using their minds as a way to avoid or as a way to learn, innovate, and create.

But with the plethora of meaningless ways that we’re prone to engage these days – primarily Netflix, YouTube, the news, and social media – it’s terribly easy to feed the mind these empty foods and then wonder why you’re feeling anxious. It would be like eating donuts all day long and then wondering why you feel so awful in your body. Our minds are designed to learn, to ponder, to expand, to innovate, to create. Our screens can be used to these positive ends as well, but it requires more effort.

Because of the internet, the world of learning is at our fingertips. You can learn a new language. You can delve into your ancestral lineage and read folkloric stories. You can learn how to garden and then plant one. But all-too-often we default into the path of least resistance with our screens and find ourselves wiling away hours through meaningless engagement.

As always in life, we have a choice, the fundamental choice of free will: How do you choose to spend your time? How do you choose to engage your mind? When is the last time you exhausted your brain by allowing it to sink into a challenging intellectual pursuit? And, most importantly, what nourishes your brain? What you can name, you can change. I’d love to hear about what nourishes your brain in the comments below. I’ve listed a few ideas in the Instagram post below: 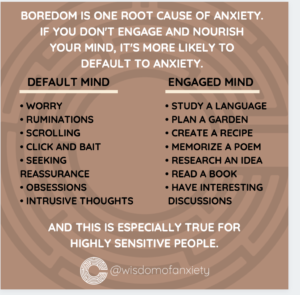