This is What Lives at the Very Heart of Anxiety 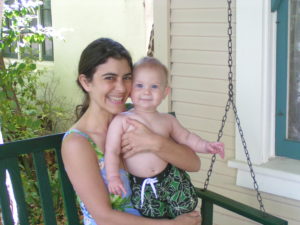 I was driving into town one evening last week and as I drove down our local highway I flashed on a time over twenty years ago when I drove from Los Angeles to San Diego. As my body sank into the somatic memory, a wave of nostalgia surged up that said, “I miss Los Angeles.”

My first habitual response to this thought/feeling was another thought: “Maybe we should move back.” But as I know that moving is one of my escape-hatch fantasies – the places we go to try to escape the messiness of life – I didn’t give it much credence. Instead, I became curious about both the initial feeling and my response to it and brought myself back into my here-and-now so I could give the feeling of nostalgia/longing some attention. In that moment, this looked like breathing into the feeling for a few full breath cycles without trying to escape it, figure out why or even clinging to it too tightly by needing to name exactly what the feeling was.

This entire sequence of mind-and-heart events lasted about ten seconds. This is what it looks like to slow down into one moment of emotion – to literally slow down time and elongate the seconds so I could backtrack to the original emotion and allow myself to be with it instead of trying to escape it.

How often do we clamp down by naming, fixing, or asking why the emotion is arising? These are all head-spaces and they’re an attempt to leave the uncomfortable realm of feelings because they’re messy. Because we’re wired to avoid pain and because we haven’t received the modeling and support required to navigate them well, we have to consciously work against these habits of escape.

Our emotions are our wellspring. They’re the source of our aliveness: our grief and joy and everything in between are what give life sparkle and sheen. They’re also one of the most potent antidotes for anxiety, for allowing ourselves to feel life fully instead of trying to control it, fix it, or escape it is one way to neutralize intrusive thoughts.

It sounds so simple, but that one moment only required one thing: full presence. The mind so desperately clings to “why” and “solutions”, but our greatest emotional task is to resist those temptations and instead trust that when we feel fully, the insight, if important, will come. And in fact the insights would arrive as a series of winged puzzle pieces delivered like clues by psyche over the next few days. Here are two of them:

• That night I had a series of anxious dreams, most of which centered around our older son and school. After a miserable first semester, he was starting at a new school in a few days and the transition was weighing heavily into both of us.

• Los Angeles is my home, my original womb, and as such, is both a locus of comfort and pain. That freeway heading down to San Diego contains a storehouse of memory: it’s both what led to some of my most cherished childhood memories and also where I had my first panic attack when I was twenty-one.

As I reflected back on the original feeling I knew that, like many of our potent emotions that surge and crest in a single moment, it contained more than what initially appeared, and that if I followed the escape-hatch mind-thread I would have missed what was actually needed. I thought about the brilliant sentence that my friend Sarah shared when I interviewed her for my motherhood course: “Birth is a magnification of every thing that you’ll experience as a mother in one bright shining neutron star of a day. If you uncoil the star, that’s motherhood.” This is how it is with the emotion-memories that both light us up and make us want to flee: there’s more than meets the eye.

And then, on the morning of his first day at a new school – knowing that he would bravely show up as the “new kid” halfway through an already challenging and disruptive year –  the insight of “why” dropped whole into consciousness, and tears filled my eyes. This is what I wrote:

I went up into his room, his brother and dad still asleep, to find him making his bed. Just the two of us in crisp dawn hours, like it was in those early years when we would be up half the night and nursing the other half. How many dawns have I seen with this beautiful boy, the baby and toddler who stayed as close to me as possible for as long as possible, who is now sixteen and so eager to meet the world?

“Are you nervous?” I asked him.

Together, we peered out his south-facing window to see a tiny sliver of the fourth quarter crescent moon, and a little star to its left.

And then I said, “Moon, Please take good care of Everest one day when he lands on your surface.”

Everest smiled, taking in my support of his dream to become an astronaut and explore the furtherest reaches of our solar system. Tears pricked my eyes: Tears of pride and grief and love and who knows what else, but I knew that that moment of nostalgia and longing for Los Angeles was mixed in there as well.

Had I jumped on the escape-hatch train that wanted to pull me into a fantasy of moving back to L.A. I may have tipped into the realm of anxiety, for anxiety is, on one level, an indicator that we’ve lost touch with an emotional piece, likely an abandoned grief that has resurfaced needing more attention. Instead, I brought my mind back to heart and hung out there for a while until the tears of endings and beginnings and the passage of time and places lost and the end of childhood, both mine and my son’s, orbited around the sun of my heart like tiny planets, touching me into that most holy realm of mystery.

With a full heart and tears in my eyes, I gave my son a hug, and we started the day.