Voices of Anxiety: I’m Not Enough 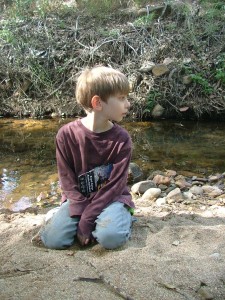 Yesterday I took my sons to observe a Parkour class. I had never heard of Parkour until my husband pointed out that Everest has been doing it naturally around our house. I watched a few videos on it and thought, “Why not? Let’s give it a try.” It’s a street art that combines gymnastics, running, and leaping to create a Ninja-like, monkey-esque crazy amazing physical experience. My boys love watching it, are compelled to do it, and so it seemed like it could be a natural fit.

My current parenting motto is, “Go where the yes is.” I know there’s value in pushing even when there’s a “no”, and I do that as well at times, but for the most part I’m interested in supporting the stream of “yes” when I see it flowing in either of my boys. Sometimes it takes me a while to let go of my personal agenda enough to listen to a clear and loud “no”, but I do get there eventually.

For example, I’ve wanted Everest to start taking martial arts for a while. I’ve carried a strong belief that martial arts helps create a stronger inner boundary. For a kid like Everest, who absorbs the world’s pain like a sponge, I’ve longed to find healthy ways for him to strengthen his inner boundary. So we’ve gone from studio to studio all around Boulder trying to find a place that felt like a fit. At the last studio, as the kids were yelling, “Yes, sir!” and the instructor was yelling, “Louder!”, I looked over at Everest to find him slumped under the chair.

In a single moment, I finally got it: For my son, who’s heart breaks if someone steps on an ant, who declared at 5 1/2 that he’s a vegetarian (in a meat-eating family), who tears up at any intimation of any form of violence, martial arts is simply not going to work for him. What have I been thinking? My son is a pacifist to his bones. A system that involves punching, kicking, and pushing is anathema to his soul.

So on we went to the Parkour class today. At first it looked like fun. The kids were smiling and happy as they jumped onto fake buildings and bounced around on the trampoline. Everest was intrigued. But then something switched. The teacher asked the kids to practice pulling themselves up onto a stack of mats. The kids took turns struggling and everyone was able to make it to the top. It was clearly hard work, but the kids seemed satisfied in their efforts. The teacher had them do it again, and this time, after the biggest boy in the class achieved it “correctly”, the teacher stopped the class and said, “Everyone, listen up! Aaron just did a Level 3.”

After that, the entire tone of the class shifted. The kids, who just moments ago were practicing for the pure joy of learning something new, were now hell-bent on achieving the sought-after Level 3. “Did I do it? Did I do it?” one kid asked repeatedly. “No, that was Level 2,” the teacher repeatedly responded. “I already did Level 3,” another kid said. “No, you didn’t,” said another. And so the competition began.

From that exact moment on, Everest tuned out. He’s not interested in doing things better than anyone else. Part of this is his temperament and part of it, I believe, is that, being home schooled, he’s buffered from the competitive, achievement-oriented environment that most schools foster. He learns because he’s passionate about learning, not to attract positive attention from the teacher. He creates because he’s creative, not to receive a good grade. He knows he’s smart, but it’s not something he lords over others or attaches his self-worth onto. It’s just part of who he is, like being kind and caring and compassionate. He’s loved because we love him. We don’t love him because he’s smart or inventive or creative. We love him because we love him and that’s just the way it is.

Where does this come from? For some people, it comes from an overt message from their parents who directly communicated that they were only enough if they received good grades, picked the right friends and later girlfriends/boyfriends, the right job, the right house, the right life. But for the vast majority of people, it comes from a covert cultural message that says: “Your self-worth is dependent on what you do, not on who you are.” We live in a doing culture, not a being culture. Our educational model says, “If you get good grades, you’re worthy. If you do what the teacher says, you’re a good student.” And we grow up to absorb a cultural message that says, “If you look right and act right and make enough money and achieve enough, you’re worthy. Otherwise, you have no value.” It’s all about the externals.

And so we grow up believing we’re not enough. We grow up having no idea that we were born enough. We think being enough is something you have to work at. We chase after the “Good job!” then the gold star and then the A and then the accolades and raises without any awareness about the intrinsic joy of learning and working. We become so externally referenced, in fact, that we completely forget what it means to enjoy something for the sake of the act itself, without receiving praise for our efforts.

And then, usually at a transitional breaking point like graduating from college, getting married, or becoming a parent, the question of self-worth comes searing to the surface. The college graduate wonders, “Who am I if I’m not a student working to receive good grades?” The engaged person frets, “Am I worthy of love just for who I am? If my marriage fails, does that mean that I’m a failure?” (It’s at this point that the perfectionist, a painfully familiar character to all of my clients, rears is head because the perfectionist attaches its self-worth entirely to externals.) And the new mother can sink into a black hole of despair as all of her familiar structures of work, exercise, and the non-mother identity fall away and she’s left face-to-face with the core essence of her being, wondering who she is if she’s not achieving in the world. It’s at these points that people realize, much to their own shock, that they have no idea who they are separate from their externals.

We may think we’re inspiring and encouraging kids to achieve their potential when we say things like, “Good job!” and “Go for the gold,” but most times all we’re doing is creating a system of self-love based on an external achievement. Like the moment in the Parkour class, it only takes a subtle shift to transmit the message of, “It’s not enough to put in strong effort for the intrinsic joy of learning and the authentic satisfaction of working hard for its own sake; you must go for the Level 3 (or the A or the raise) in order to do really well.”

It takes most people a long time to turn this conditioning on its head and start to redefine their worth based on their intrinsic goodness and core qualities. For many people, what is required is no less than a spiritual infusion, a grace-given moment of getting, deep in the core of their being, that they were born irrevocably and inarguably good and worthy. For others, it’s a daily practice of replacing the negative beliefs about self-worth with the truth. It’s not easy to excavate years of false messaging, but not only is it possible, it’s necessary. Our well-being, our genuine knowledge of self-love, depends on it. And without that, all of the externals – the job, the house, the marriage, the kids – are incapable of bringing us the happiness and fulfillment that we all long for.