Dismantling this Offshoot of Anxiety Will Set You Free 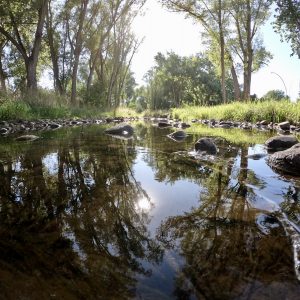 “Anxiety is the dizziness of freedom,” said Kierkegaard as quoted by Mark Nepo, who continues with, “The truth is that every fresh experience has this dizziness of freedom that we have to move through. Every time we reach beyond what is familiar, there is this necessary acclimation to what is new. It is the doorway to all learning. We needn’t be afraid of it or give it too much power. We simply have to keep leaning into what we are learning.”

Building on what I wrote about last week in terms of the fear of growth and change, I’m sharing a personal story this week of how I’m currently working with my own anxiety layers – of how, as Nepo writes, I lean into the dizziness of change as I rearrange my own deeply entrenched, intergenerational anxiety. Everything I learn in my own life I bring to my work, and everything I learn from my work with clients and course members – from YOU – filters into my own life. This symbiotic learning is what I bring to my new course, Break Free From Anxiety, and I’m very excited about the community that is already gathering at the well, ready to take this journey with me. What will we learn! What new layers of anxiety will we step into and watch dissolve! I can’t wait to find out.

When anxiety sets in, a normal response is to seek reassurance. As the need for safety and security live at the core of anxiety, it makes sense that we would respond to anxiety by looking outward for signs of “okay-ness”: Is my health okay? Is my relationship okay? Are my finances okay? For those suffering from relationship anxiety, this need for reassurance is often accompanied by a need to confess, and thus initiates a cycle of anxiety-confess-be reassured. What we don’t often recognize is that the need to seek reassurance and confess can take on addictive tendencies, meaning that they create their own cycle that feeds off itself: the more you seek reassurance, the bigger your anxiety. When you can dismantle this addictive cycle, you take one more step toward freedom.

The primary area where my anxiety recently constellated was around my kids, mostly around their health. Like all addictive cycles, the more I fed the impulse for drama, the bigger it grew. As I watched my mind, I began to see more clearly than ever the crucial micro-moment of choice: I could feed the fear and experience the cycle of fear-drama–reassurance or I could choose to anchor into a mindset of wellness and trust in the much more likely probability that everything was going to be okay. The more attuned I became to fear’s attempts to hook me, the more I saw how often it rose up throughout a single day.

For example, one morning a few weeks ago I was driving our older son to his glider lesson in Boulder. Historically, I have felt anxious before he flies, but this anxiety ramped up over the last few months after he almost passed out while flying in early June. That event tripped a fear-wire in my psyche about my kids’ health, and, while understandable given the alarming event, I could feel that my fear-mind shift into overdrive over the weeks following the event. Eventually, it reached a breaking point where I knew I could either continue to feed this fear track or recognize that I was being given an opportunity to heal a layer of deeply embedded fear. (By the way, our son is completely fine. I won’t go into the details here, but the event initiated a series of tests that revealed some crucial imbalances that needed attention. Once we found the correct protocol, his health rebounded better than ever.)

On this particular morning a few weeks ago, I watched my mind attach onto all of the different fear stories about my son flying and also watched it dabble in the much more likely possibility that he would be fine. I’m particularly aware of not wanting to transmit the mindset of fear and worry into my kids, so as I watched my mind I also held my tongue. Instead of saying to my son, “You’re going to be safe, right?”, which would only infuse that track of fear into his mind, I chose instead not to say anything and to allow him to be in his own space. At one point he said, “I’m excited to fly!” and again I watched my fear-mind want to dissect his statement and counter with something like, “And maybe you’re also feeling a little nervous?” It’s extraordinary how quickly fear attempts to take center stage!

Again, at the core of all anxiety is the need for safety. That is ultimately what we’re seeking and every moment that fear rises up is an opportunity to anchor into a mindset that is informed by the fundamental belief that we’re okay or to continue to feed the fear mind. If we’re talking about relationship anxiety, we can tap into the mindset that we are being guided towards Love. If it’s a health anxiety, we can anchor into the mindset that our bodies are miraculous healing vessels and that most times when there is a symptom it resolves itself on its own. These are very different mindsets from the ones that inform our culture that is run on the currency of fear.

Sometimes it feels like a massive and unbearably risky leap to choose to anchor into the mindset of trust rather than the chatter and stories of fear. It feels this way because the ego feeds you the line that if you choose to trust that you’re okay and that your kids are okay – that plane isn’t going to crash, for example – that you’re giving permission for something catastrophic to happen. The ego believes that worry holds up the airplane, that being hypervigilent circumvents catastrophic illness, and that thinking about fear can control the future.

“It’s not safe to trust. If you trust, you’re giving permission for something bad to happen.”

“It’s cavalier to trust! It’s testing fate! The only thing keeping you safe is your hypervigilance!”

“Sure, most times things turn out okay, but what about the times that it’s not okay? If you’re constantly scanning you can prevent catastrophe.”

“It’s arrogant to trust, and the universe doesn’t like arrogance or complacency. As soon as you relax into LIFE, life will come in to teach you a lesson.”

But at some point we become so exhausted by choosing the fear story that we make another choice. And it’s at that moment that we choose our freedom.

As I write these words, our son is 12,000 feet above the earth. I can choose in this very moment to send my husband five texts over the next two hours writing things like, “Do you think he’s okay?”, which might give me a half a second of reassurance when he responds with something like, “Yes, I’m sure he’s fine.” But the irony of seeking reassurance is that the price for that half a second of comfort is opening up the entire field of fear, which you’re then plunged into for the next hour or six hours or years. It’s as if giving attention to the fear at all gives it permission to take over.

Feeding fear does not prevent that things from happening. Feeding fear only creates more fear.

On the other side of the equation, feeding joy creates more joy. As my son soars above the earth doing the activity that brings him the most joy in this life, I can also choose to connect to the joy that my son is connected to his passion; the joy that I feel when I anchor into trusting in the likelihood that he’s okay and that he’s going to be okay; the joy in letting go of control.

We also unleash joy when we decode the secret messages encoded into fear’s lies. Let’s try it with each of the above lines:

Fear says: “It’s not safe to trust. If you trust, you’re giving permission for something bad to happen.”

Wise Mind says: “The safest thing you can do is trust. When you trust, you’re giving permission to the universe for something very good to happen internally.”

Fear says: “It’s cavalier to trust! It’s testing fate! The only thing keeping you safe is your hypervigilance!”

Wise Mind says: “It’s courageous to trust! It’s aligning with the reality of right now! The only thing keeping you in psychological and spiritual danger is your hypervigilence!”

Fear says: “Sure, most times things turn out okay, but what about the times that it’s not okay? If you’re constantly scanning you can prevent catastrophe.”

Wise Mind says, “Sure, most times things turn out okay! Isn’t that incredible. And when it’s not okay, you’ll know it and you’ll find the resources to handle it. If you’re constantly scanning you’re missing the moment. And when you shift the habitual fear response to gratitude, you’re building a reservoir of joy that will bolster during the times you really need it, as Brene Brown talks about here (watch from 6:50-10:20).”

Fear says, “It’s arrogant to trust, and the universe doesn’t like arrogance or complacency. As soon as you relax into LIFE, life will come in to teach you a lesson.”

Wise Mind says, “It’s humble to trust, and the universe loves humility. As soon as you relax into LIFE, life will come it to catch you and smile that you’re learning the most important lesson there is: how to let go.”

It’s also become increasingly clear to me as I have shined a very bright light on this worry track over the last few months that there is a significant element of fear stories that are inherited until they’re entrenched into habit; they are both mine and not mine, by which I mean there is an inter-generational worry that has been drip fed down the bloodlines for centuries until they become entrenched as habit in each new person at the end of the line. Each time I choose to trust I am choosing a different family story and, by doing so, I am changing a long-standing habit and changing the direction of the intergenerational baton. In other words, I am handing my sons a different template. Every time I choose to trust in the goodness and wellness, I am rearranging not only my cells but the cells of seven generations before me and seven generations to come. There is, perhaps, no more important work we can do in the inner realms than change those fear tracks and create new habits.

This is the last week to sign up for Break Free From Anxiety: A 9-Month Course on the Art of Living. Many of you have asked if this course is relevant to those who don’t struggle with relationship anxiety or obvious manifestations of anxiety, and the answer is an empathic yes. While an element of my work focuses on relationships, the majority of it is on anxiety in general, self-trust, and self-love. This course is a deepening of the principles and tools that I share in my book, The Wisdom of Anxiety, and on my blog. If you’re ready to break through resistance, learn what it means to truly take responsibility in the four realms of self, heal self-doubt at the root, and spiral into your next layer of healing, this course is for you.