Feelings are Manageable; Anxiety is Not 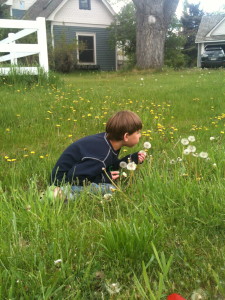 “Mommy, lets look at some rain boots for Asher,” my 9-year old, Everest, says as we head to the sales counter at our favorite children’s clothing store.

“Oh, great idea,” I respond, and hold Asher’s hand as we walk to the display. Asher immediately grabs a pair of ladybug rain boots, an almost identical replica of his big brother’s pair that has cracked open to the point where they need to be replaced. Asher tries them on, they’re a perfect fit, and we start to walk to the counter when Everest grumbles, “It’s not okay that Asher gets new rain boots before I do.”

“But you just suggested that we look for new rain boots for him! I don’t understand why you’re upset,” I say, annoyed.

It’s a classic case of sibling envy, but it takes me a while to see it.

A few minutes later, as we’re driving to our next destination, Everest complains, “It’s not okay if Asher wears his boots in the creek before mine arrive.”

“It’s not okay…” is an oft-used line from Everest when he’s trying to control outer circumstances. I used to try to convince him why it is okay until I realized that arguing with the fear-and-control driven ego is pointless. I’m becoming more adept at naming his experience then directing him down into his feelings.

“It sounds like you’re trying to control instead of letting yourself feel envious,” I said.

“It’s kind of like jealousy. Jealousy is when you’re feeling left out, like when Daddy plays with Asher and makes him laugh really hard. Envy is when you want something that someone else has. They’re both really hard feelings to let yourself feel,” I explain.

“You mean the green-eyed monster?” Asher pipes up. “Humphrey was jealous of Og the Frog.” He’s referring to one of their favorite chapter book series about Humphrey the classroom hamster, and how he feels jealous when the teacher brings in a new pet, a frog, and all of the kids go ga-ga over him.

“Yes, that’s jealousy. It’s called a monster because it feels so big inside, like it could just swallow you up. Most people try to deny it when they feel jealous or envious because they think they shouldn’t feel that way, but everyone does feel those feelings sometimes. They’re part of being human.

“But they really are extremely difficult feelings to feel. A part of you (ego – although I don’t use that term with my kids yet) doesn’t believe that you can handle such a big feeling so it tells you to control other people so that don’t have to feel it. But it doesn’t work! You can’t control people and circumstances, and it takes a lot of energy to try. In the end it’s much easier to let yourself feel the envy. It’s just a feeling – an energy – and it’s very uncomfortable but it will pass through you. When you try to exert control you turn tight inside and the feeling can’t get out. Then it becomes trapped inside of you and actually grows bigger. If you just let yourself feel envious it will pass through you and eventually you’ll arrive at acceptance.”

Everest seems to hear me. They both do. Everest’s complaining and controlling quiet down and I can visibly see him exhaling. The tightness of control released into acceptance.

I was teaching my kids a simple equation, one that I teach my clients every day:

This was one of my better parenting moments, but I admit: I get hooked into trying to talk Everest out of his difficult feelings just like everyone else. Well, let me rephrase that: I get hooked into talking Everest out of his controlling ways when I forget to identify the root feeling. Before I launched into my inspired speech above, I launched into a lecture about how he’s focusing on the wrong things. He’s grumpy about a pair of boots when some children don’t have enough to eat, or clothes, or even parents. (Yes, I really said that and cringed at myself even while saying it.). It just goes to show what a mess is made when two egos spar for control: Everest trying to control Asher and me trying to control Everest. And beyond that what happens when we hook into the storyline of control and forget to ask: what is this attempt to control covering up?

Everest is far from alone in trying to control his outer circumstances in an attempt to avoid painful and uncomfortable feelings. We all do it. We seem wired to do it. I’ve watched Everest try to control others or circumstances from the time he was a baby as a way to avoid pain. And as newborn parents, we caved into his attempts more often than we should have, allowing him to have more control than any baby or young child wants. But I will say here (although it’s not really the main point of this article) that when a child is highly sensitive (or off-the-charts, over-the-top sensitive, as is the case with my firstborn sweet love), the mainstream rules about “don’t coddle your child” don’t apply. You must coddle. You must attend. You must listen very closely to their needs and attend to them as much as possible. But at a certain point, when the inner strength and outer body have solidified, it’s time to allow the child to come into contact with the powerlessness of being human, which means learning that you have control over very little outside of you in this life. Instead of trying to protect them from their powerlessness, you hold them through their pain and agony. You love them through their rage. And you guide them lovingly through this almost unbearable lesson, over and over and over again.

It’s what all spiritual traditions teach: the attempt to control circumstances as a way to find happiness will only land you in misery. Rabbi Shefa Gold writes about in this way in Torah Journeys: “It is an incredibly radical realization when we discover that it is the inner state of consciousness, and not outer circumstances, that determines whether our lives are an expression of Heaven or Hell [she’s writing about heaven and hell as inner states of consciousness, not actual locations]. Personally, this realization stands as the foremost challenge to my own ego, which has struggled for nearly half a century to manipulae my outer circumstances.

“The fear-driver ego says, ‘If only I had these things, this job, that lover, a slimmer body, nicer clothes, a good teacher, friends who were more loyal to me, or more time… then, everything would be OK. The wisdom of my soul says, ‘I will find Heaven here regardless of circumstances.'” (p. 131)

And one of the golden keys, one of the ways that we learn to let go and flow in the river of life and find heaven in each moment, is to allow ourselves to feel our feelings. It’s a satisfying moment in a session when a client says to me, “I finally understand what you’ve been saying. Today I noticed by brain swimming and churning and the anxiety building up and I took a few deep breaths, turned inside, and asked myself, ‘What am I feeling right now?’ It’s usually something like grief or envy or maybe fear of the unknown, and when I just let myself feel it, the anxiety fell away.”

That’s it. That’s everything. Feelings are manageable; anxiety is not. The more you practice cutting through the habit of spider monkeying up the vines of anxiety that entrap your brain and instead drop back down into you heart, where your feelings live, the less anxious and more peaceful you will feel.