The Life You’re Meant to Live 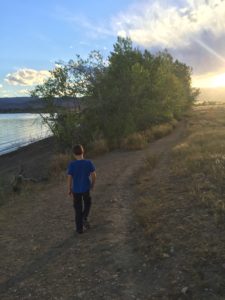 Somewhere along the road of childhood into adolescence, a belief is transmitted that says: Follow the roadmap that culture presents and you will find a pot of gold at the end of the rainbow. This roadmap looks like: Graduate from a 4-year university, land a corporate job then climb the ladder, get married, buy a house, then have a couple of kids (in that order). There are a thousand other assumptions along the way: Marry someone of the opposite sex (who is also “the love of your life”); marry someone of similar background; don’t move too far away from your parents or your hometown; have your babies in the hospital; send your kids to school; don’t do your own thing; don’t have your own life, I could go on and on.

Very few people question this assumed path. Instead, they follow its implicit formula and then, years down the road, wonder why they feel unsettled inside. Or they don’t follow the formula and mistakenly attribute their restlessness and anxiety to the the fact that they’ve “failed to comply.” It’s a one-size-fits-all model that renders everyone miserable.

The antidote is to learn to chart your own course, and the only way I know to chart your own course is to connect to your innate and intrinsic sense of self-trust. Your self-trust is the compass that says, “Too far North, veer East” and “Moving too quickly; slow down.” In real terms, it’s the compass that says, “I don’t want a corporate job. I want to work for myself” or, conversely, “I’m tired of working for myself. I want a corporate job” or “I don’t want to have children despite the implicit and explicit message that equates a woman’s worth with her fertility.” The compass of self-trust is the only reliable source-point for navigating through this busy, complicated, confusing world and moving more fluidly through your internal landscape. When your self-trust is intact, you can chart the life you’re meant to live (which doesn’t mean you’re lifted above pain but that you’re in alignment with your Mother ship).

My family lives about as far out of the mainstream as a family can live short of moving off the grid in the middle of the woods. We’ve made choices along the way that less than 1% of our population make (including two homebirths and homeschooling our kids, to name a couple of them). Over ten years ago, in a bold move that left our family quaking for a few years, my husband walked away from a lucrative corporate job so we could move from Los Angeles to Colorado and create a life of more simplicity and balance. Now we both work at home and run our own businesses while raising our boys on the land and creek that runs through it.

Our life works for us, but it’s certainly not a path that works for everyone. The work of self-trust is to carve the life that makes sense for you. When I’m counseling women who are deciding where to birth their babies, for example, my role is to help them connect to where they feel safest as that’s where their bodies will open. For some women, that means giving birth at a birthing center. For others, it means giving birth at home. And for the majority, it means giving birth in a hospital (often with midwives). Carving your own path doesn’t mean chucking everything the mainstream culture suggests as the “right” way. Rather, it means listening to your inner voice that lives in your well of self-trust that says yes to this but no to that.

As Morrie Schwartz says in the beautiful little book, Tuesdays with Morrie:

“Here’s what I mean about building our own little subculture. I don’t mean you disregard every rule of your community. I don’t go around naked, for example. I don’t run through red lights. The little things, I can obey. But the big things – how we think, what we value – those you must choose for yourself. You can’t let anyone – or any society – determine those for you.” p. 155

Living the life you’re meant to live doesn’t mean living the life of the culture’s dreams. It doesn’t mean living the life of your parents’ dreams or your grandparents’ dreams. It means connecting deeply enough with yourself so that you can make important decisions that stem from the juicy and alive place inside of you that quivers and shakes in its own dance of YES. It means diving down into those rich waters so that you can discern what your dreams are, and then finding the courage to follow them. And I’m not talking about the lofty dreams that the current pop subculture espouses that say things like, “You have to branch out on your own and blaze a solitary trail in the wilderness (aka Cheryl Strayed) before you get married.” I’m talking about knowing yourself well enough so that you can follow your own trail of values marked by the breadcrumbs of yes and that’s right and I know. That’s what creates a path of joy.

What I hear quite often among my audience are the questions, “How do I know what I value? How do I know if I’m with the right person? How do I know if I’m living a life consistent with my dreams?” Because we raise people to externalize their sense of self by training them to chase the next confirmation of their worth – from gold stars to raises – and brainwash them to follow the formulaic yellow brick road that leads to failed promises, most people have no idea who they are or how to connect with their innate sense of knowing and self-trust. They long to know themselves well enough to like themselves and, thus, trust themselves, but they don’t know how to get there. They long to drop down below the realm of thoughts and feelings, neither of which are reliable compasses, and connect to the well of Self, where the crystal compass of self-trust lives. There is a roadmap to get there, but it’s not the one taught in mainstream culture. There is an equation of sorts, but it’s not the one you learned in school. And when you learn it, you can answer the questions that stem from lack of self-trust and sit with the uncertainty that arises from the unanswerable questions.

It’s for this reason that I created my program, Trust Yourself: A 30 day program to help you overcome your fear of failure, caring what others think, perfectionism, difficulty making decisions, and self-doubt. There I teach the roadmap, information and tools that lead you into your interior realms so that you can learn to live life and make decisions n a way that honors who you are and stems from your true self. If you’re hoping to strengthen your sense of self and shore up your relationship to uncertainty, I hope you’ll join me for this next and final round of 2016, which will begin on Saturday, October 22. See you there.