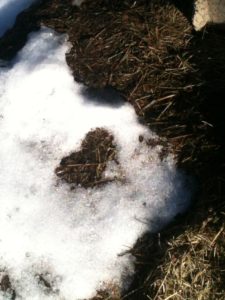 Over the years, I’ve worked with many clients who have suffered from the intrusive thought, “What if my partner is gay?” (or “What if my partner is straight?” for those in a same-sex relationship), and while I’ve written several posts on the “What if I’m gay?” spike I haven’t written about what is, in some ways, a corollary thought. As my work largely centers around shedding the light of conversation and consciousness on taboo topics, it’s time to bring this thought out of the dark chests of the unspoken mind, where, in silence, all it can do is become grown over by the moss and dust of shame.

It’s extraordinary how much shame a single thought can grow. I’ve had clients tell me that they’ve been able to share many intrusive thoughts with friends but when they share the question, “What if my partner is gay?” they see panic flashing in their friends’ eyes and the immediate implication is to run. Of course, if we had a wider cultural understanding that intrusive thoughts are metaphors and that taking them at face value is what initiates the anxiety spin-cycle, we would be able to hear a thought like this from a friend and ponder, “I wonder what this thought is protecting you from feeling?” or “I wonder what the metaphor is inside this thought?” Hopefully one day the language of metaphor will penetrate the collective consciousness to the point where we will no longer have to hide these common, everyday thoughts from our loved ones. Understanding how thoughts work will eventually eradicate this type of shame.

How do we work with this thought and what are the messages? In essence, we apply the same principles to this intrusive thought as to any other. First, we name the thought for what it is: intrusive. Again, the moment we take the thought at face value we fall down the rabbit hole of anxiety and despair. But when we can name the thought as “intrusive” instead of hooking into it as “truth”, we take the first, and most essential, step toward being able to see the thought as a messenger from our unconscious designed to deliver essential information about our hurt places and inviting us into our next stage of healing and growth.

Let’s talk a bit about naming. An analogy came to me this morning as I was going back and forth between writing this article and homeschooling my boys. Just like I’m teaching my boys how to name the parts of speech – verb, noun, collective noun, predicate, etc. – so that they can begin to understand a sentence structure and, hopefully, become proficient writers, so when we learn to identify the parts of our minds we become more proficient in understanding how thoughts work. The more specific we are – the more we can break down something initially daunting (a sentence, a stream of thoughts) into manageable, bite-sized pieces – the less overwhelming the thing becomes. Naming is a skill that requires clarity and specificity, both qualities of our inner masculine. Like all skills, the more we practice it, the easier and more habitual it becomes.

As we’re naming, it’s important to identify with as much specificity as possible the common sub-thoughts that the ego collects and collates in the rolodex of the anxious mind as evidence that one’s partner is gay. Again, the more specific we are about the “parts of the thoughts” (like the parts of speech I’m teaching my boys), the more adeptly we’ll be able to expose the truth by calling it by its true name. Some of the common subset thoughts associated with “What if my partner is gay?” are as follows:

When discussing intrusive thoughts, it’s essential to remember that the conversation has nothing to do with the thought itself. In other words, the thoughts “What if my partner is gay?” has no more to do with sexuality than “What if I’m gay?” does. These are simply changeable hooks where anxiety hangs its hat, stories into which the ego gathers then pours evidence to try to avoid risk and gain traction against the ever-present awareness of the groundlessness that defines our human experience and becomes particularly acute around love and transitions.

Next, we recognize that the thought arises as a way to protect us from the risk of loving and the possibility of being hurt by love. At the core of all intrusive thoughts is the misguided attempt to find certainty. The ego mistakenly believes that if it can answer this one question, all be will solved and it will gain the ground that it so desperately craves. When it comes to love, if the ego decides that one’s partner is gay ( in a heterosexual relationship), then you would have to leave. Our fear-mind, terrified of love, looks for any escape hatch it can find to circumvent the risk of loving, and what better exit strategy that concluding that your partner’s sexual orientation isn’t conducive to the relationship that you’re in. We’re so scared  being hurt by love that a part of us would rather eliminate the risk all together and hedge our bets from the outset, which means walking away. If you conclude that your partner is gay, you’ve given yourself a full and justifiable reason to submit to ego’s fears and end the relationship.

Finally, we take time to dissect the thought and become curious about unearthing the metaphors and messages embedded inside it. This is where the archeological process of discovery comes in, and where, in my opinion, it gets fun! Guided by the headlight of curiosity, we ask, “What areas of growth is this thought pointing to? What pain, old scripts, or outdated decisions are asking for my attention through the brilliant, albeit seemingly circuitous, methods of my unconscious? If this were a dream and I understood that all dream images, on one level, are metaphors that point to some aspect of myself that is longing for integration, what is this thought inviting me to excavate?”

One common belief embedded in this intrusive thought centers around ideas of what is means to “be a man”, often stemming from the juxtaposition of growing up with a father who embodied the male archetype of emotionally unavailable, stern, and closed off versus the emotional available and loving partner you’ve chosen . When I ask my clients who struggle with this intrusive thoughts what their father was like, they often say something like, “He was completely emotionally unavailable – the opposite of my partner!” So even though she has consciously chosen someone very different from her dad, the template for “manhood” runs deep in her memory, and accepting a new image of manhood takes time and conscious attention. The upsurge of this thought, and it’s sister-thought, “He’s not manly enough” in the culture indicates that we’re being asked collectively to redefine masculinity and invited to take a quantum leap in terms of how we see men. The old, outdated messages and models of “what it means to be a man” no longer serve anyone (I’m not sure they ever did), and if we dig deep inside these projections we can begin a conscious conversation about what true masculinity is.

To offer a lifeline of reassurance to those suffering with this intrusive thought, it’s been almost six years since I worked with the first round of clients who presented this thought to me, and they’re all happily married with children. They look back on the thought now and clearly recognize it for what is was: a defense mechanism to protect them from the risk of loving and an invitation to address their outdated beliefs about men. Like all intrusive thoughts, when we see past the initial alarm-bell layer and take the time to dig into the roots, we’re rewarded in spades, not only with the ability to move forward in our healthy, loving relationships but also with the gift of growing into more compassionate, open-hearted version of ourselves. These are some of the gifts of being love-warriors.